Aphasia, as a result of a stroke, is a scary thing. Meet Jeffrey Fisher, survivor, teacher, and more. Schedule him to come and speak for you!

Aphasia is one of the most significant and common conditions caused by stroke or brain injury. It is the loss or impairment of a person’s ability to use or comprehend words. It usually results from brain damage to the left part of the brain. Aphasia can result in difficulty speaking, comprehending language, writing words and reading. People with aphasia can also have difficulty with performing mathematical functions. An important thing to remember is that aphasia is a loss of language cognition and does not reflect intellect, and affects each individual in a unique way. While recovery is a difficult process, Jeffrey Fisher and many other stroke survivors are proof aphasia can be overcome.

One Life Changing Event Started a New Era of Inspiration

Prior to Jeffrey’s stroke, he was the Vice President of Sales and Marketing for Godshall’s Quality Meats, Inc. and an adjunct professor at Elon University, Elon, NC. His passion was teaching and he planned to teach full time at the university. This all changed on September 2, 2011. He woke up and found his entire right side was paralyzed from a stroke; he could not walk; his right arm was clutching his heart; his speech was impaired; he could not say a word; he could not read; he could not write. He had severe Aphasia.

This began a brand new journey of rehabilitation.

He was frustrated with the way people with Aphasia were treated and perceived. Friends, family and the medical community at large, did not understand that Aphasia does not affect a person’s intellect… just the ability to speak and comprehend language. He was told time and again that his language issues would not get any better than he was at that moment. Not to expect to get back to 100 percent. He has proven them all wrong!

Jeffery now lives in Charleston, SC, with his wife, Alice and has two sons in Charleston. One is Justin, who is married to Laura, and the other is Trevor. He has another son Brandon, who lives in Phoenix, AZ.

He has two dogs. Hannah is a ten years old German Short Haired Pointer. Her back legs don’t move any longer because of an accident. Rucca, who is adopted, is a nine year old English Springer Spaniel.

Jeffrey is achieving his goal of teaching others about Aphasia and how somebody can recover through speaking to and educating those with Aphasia, caretakers, doctors and college students, and the general populace. He is giving voice to what it’s like to have Aphasia and how important it is to keep finding new ways of getting better and to never give up on recovering your ability to speak again. He would love to bring his inspirational and informative message to your Aphasia group, students, or nurses and doctors. If you connect with this message or you know someone with Aphasia, reach out to Jeffrey for an inspirational and knowledgeable speaker who knows what it's like to lose your voice. 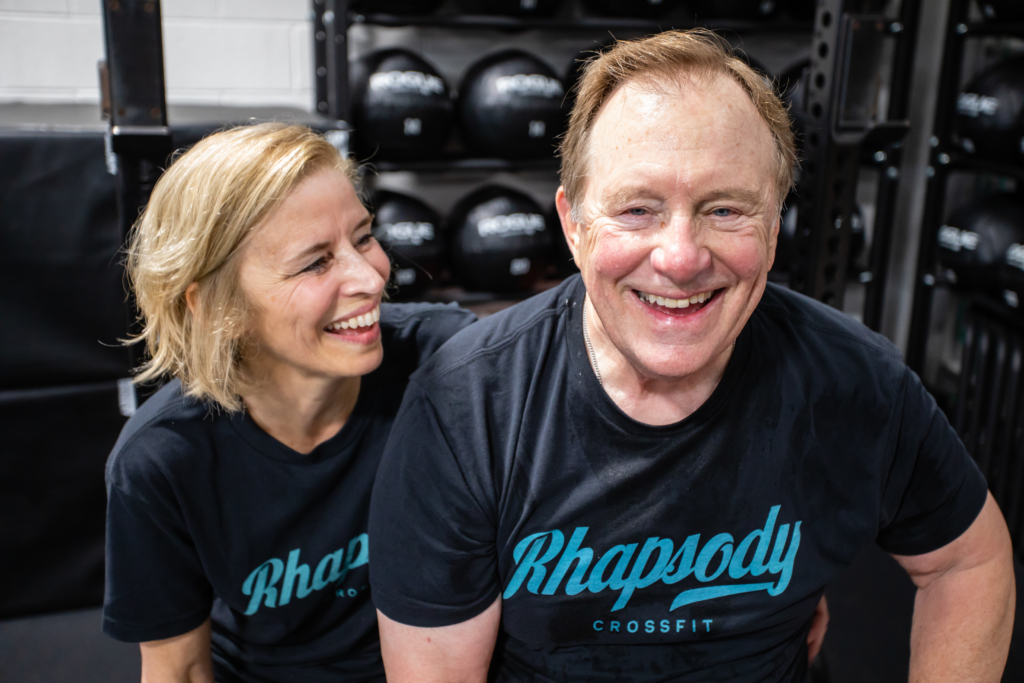 Be Best Friends First, Never Give Up – Meet The Fishers – Rhapsody Fitness

Rhapsody Fitness athletes Alice and Jeffery Fisher share their story of finding love, making a comeback and raising the bar on relationship goals.. Faster than you could wave the start flag, Alice and Jeffery were off to the races. Introduced through mutual friends, the two began circling each other at NASCAR and dirt track events.
Read the full article here.

Who is impacted by aphasia?

Over one million people in the United States are currently affected by aphasia and suffer some degree of difficulty understanding language according to the National Aphasia Association. Nearly 80,000 Americans acquire the language disorder each year. Cerebral vascular stroke is the most common cause of aphasia (85%) but it can also be caused by traumatic brain injury, brain tumors, head trauma, degenerative disease, and metabolic changes. Between 25-40% of stroke survivors have aphasia.

How does aphasia impact a person’s daily living?

Being diagnosed with aphasia can impact an individual’s day-to-day life in many ways as it effects a persons language cognition and auditory comprehension. Imagine being unable to order your favorite drink at Starbucks, or a vanilla milkshake at Cook Out! Unable to read the morning paper, or even sign your name.

Aphasia affects every person's language comprehension and ability to speak differently depending on the severity of their injury and what part of the brain was affected. While someone may have mild difficulties “finding the right word,” another person may have severe difficulties with verbal expression and understanding.

People with aphasia CAN improve their functional communication skills.

8-10 hours of treatment per week has shown to improve a patient’s language comprehension, compared to those not receiving consistent treatment.

Support groups have been shown to help people with aphasia by offering guidance, tips and emotional support. There are more than 600 support groups for stroke survivors and aphasia in the United States.

Goal number one: educate both medical students and doctors that recovery is not finite…it is unlimited.

Goal number two: to those with Aphasia and their caregivers – keep seeking to find a way to improve. If something isn’t working, try something else!

Goal number three: Even though something life changing has happened… keep working to get better and better!

WE WERE RECENTLY FEATURED:

Thank you Triangle Aphasia Project for the chance to speak at the TAPTalks Reboot!

Our TAPTalks reboot was a great success! Clients, family members, friends, volunteers all gathered to hear the...

“Jeff, I already had so much respect and admiration for you, but now I have more I thought possible. You are absolutely the hardest working, smartest, strongest, most optimistic, positive person I have ever met. You’re a difference maker”.

“This is so incredible.”

This is so incredible. Congratulations on reaching this goal!! Thank you so much for sharing this with us. So glad to see you are doing well!

“I cannot wait until your next speech!”

You were fantastic! I cannot begin to tell you how proud I was watching this glorious event and how hard you have worked. As a smart person once said the only obstacle between achievement and failure is ourselves. I cannot wait until your next speech! The Man I the Mirror is BACK!

“Quite an inspirational speech … you made feel so happy happy. You are amazing.”

“…anyone with aphasia would be so inspired.”

Jeff, that is so awesome. You spoke so well for at least 20 minutes. (It’s not in my comfort zone giving a speech – I would be all tongue tied) Your story is impressive and anyone with aphasia would be so inspired. I’m proud and happy for you. I know Howard would be too. Keep up the good work.

“You have always been a great friend, mentor, and inspirations.”

I just watched this video and I can’t tell you how big a smile it put on my face. I am proud of your drive to get better and not give up. I used to call you when I had problems and needed some encouragement and you always had a way with words that could calm me down and make me think clearly. You have always been a great friend, mentor, and inspirations. Thanks for sharing this video and I am so glad to see you are still swinging and fighting to get better. I watched it and brought Scott Cantrell into my office to watch it again with me.

“Great Job … proud to call you a friend.”

What a great message and an incredible journey! I am inspired by both your attitude and your hard work! You are my new hero!! Vanilla milk shakes are on me at the reunion in September. Continue Success!

“Talk about a wow factor!”

Talk about a wow factor! Never stop believing. This was fantastic and inspirational, Coach! Thanks for sharing!

“You are a hero, and I thoroughly enjoyed your speech.”

You are amazing!!! Your positive attitude, self-discipline, and unrelenting hard work has created a true miracle. I am humbled by your progress, and the impact you have had on numerous people during your journey. You are a hero, ad I thoroughly enjoyed your speech. Thank you for sharing the video.

“…one of the more inspirational talks I’ve seen in a very long time.”

Jeff that’s one of the more inspirational talks I’ve seen in a very long time. So proud of the progress you’ve made. I thought you made great progress when you visited LM and you were leaps and bounds beyond this. Awesome! Going to never view a vanilla milkshake the same way again!!!!

I just finished watching your speech…all I can say is AMAZING…Amazing because of
the courage it took to do it, amazing because of the progress you have made since
we last met and your message was truly inspirational. Thanks for sharing.

“Jeff, this is wonderful!! Fantastic Job”.

“Last night’s talk was the highlight of our group…”

I just wanted to tell you one more time what an exceptional job you did last night! Last night’s talk was the highlight of our group and was easily my favorite meet-up yet. I have received so many compliments from everyone. Hearing your story is motivational to both fellow members/their families –AND for people like me. It gives us the drive to continue doing what we love.

You truly should be really proud of yourself! Keep up the good work!